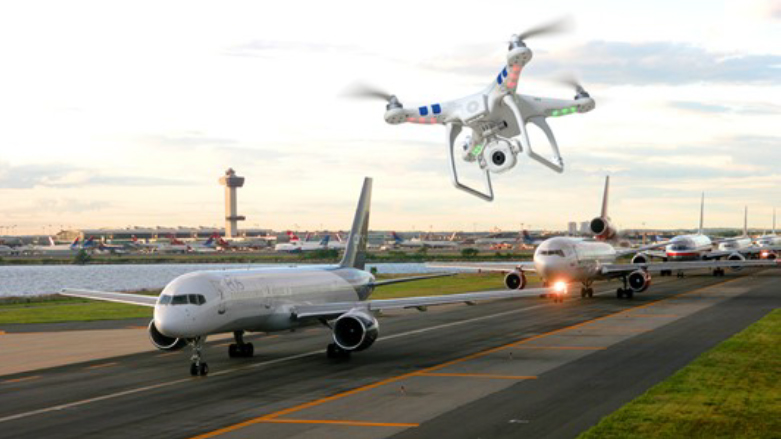 The use of drones (aka unmanned aircraft systems (UASs)) has increased dramatically in recent years, and is projected to continue to grow. The Federal Aviation Administration projects that by 2020 there will be more than 2.5 million drones in the U.S. The proliferation of drones creates potential safety hazards, including in the areas around airports and in arrival and departure path corridors. Between 2014 and 2015, the total number of undesirable encounters between drones (also known as unmanned aerial systems or UASs) and manned aircraft more than quadrupled and reached almost 1,000. Included in this total are over 300 near-midair collisions.

It is essential for safety that such encounters be minimized. Researchers at UMass-Amherst recently examined this topic. They investigated current counter-drone technologies and then made recommendations to MassDOT regarding counter-drone measures for protecting airports and nearby airspace.

Led by Professor Douglas Looze (Electrical and Computer Engineering) and Research Fellow Michael Plotnikov (UMTC), the UMass-Amherst research team began by gathering information on current counter-drone technologies. A search was conducted of both Internet and print publications to determine which technologies and approaches might be most useful for detecting, tracking, intercepting and interdicting UASs flying near airports.

The researchers then evaluated 16 available products in three categories: ground-based detection and tracking systems, ground-based UASs interdiction systems, and ground-based hybrid detection-interdiction systems. The different types of product were evaluated separately in terms of their cost and their performance. The performance criteria for evaluation were developed and weighted in consultation with 51 experts, stakeholders, and UASs industrial professionals.

The researchers also considered onboard collision avoidance options such as sensors and the programming of onboard avionics to incorporate geofencing of flight-restricted areas. Many UASs manufacturers incorporate these technologies into their products, but there are currently a number of limitations where they wouldn’t help, including if a UASs owner intentionally modifies their UASs to disable the collision avoidance feature.

Based on their evaluation, the research team recommended specific brand detection and detection-interdiction counter-UASs systems for further investigation and consideration (no interdiction systems are recommended for further consideration). The researchers also made the following overall recommendations:
(a) That airports use multiple integrated technologies to detect, track, and interdict UASs.
(b) That MassDOT supports federal legislation to require that all commercially produced UASs over 0.55 pounds in weight integrate geofencing into their GPS navigation system.
(c) That MassDOT create a pilot program to conduct further evaluation of select counter-UASs products, such as those with the highest ratings in this current study.

The details of this research study, its findings, and recommendations are presented in the MassDOT report “Current Counter-Drone Technology Solutions to Shield Airports and Approach and Departure Corridors.” This research was conducted as part of the MassDOT Research Program, with funding from the Federal Highway Administration (FHWA) State Planning and Research (SPR) Program.