Summary: Curves are typically associated with an increased safety risk with over 25 percent of all fatal crashes attributed to curves. Single-vehicle run of the road crashes account for approximately 70 percent of all curve-related fatal crashes (Srinivasan, 2009). Extensive research pinpoints that the causative behavioral factors (Charlton, 2007) that cause such crashes, e.g. inappropriate speed monitoring, poor lane positioning etc. often relate to the geometric properties of curves (Khan, Bill, Chitturi & Noyce, 2013). Curves at two-lane rural highways are known to present the most risk (Comte & Jamson, 2000). Several treatments have been proposed including dynamic warning signs, speed advisory signs, chevron delineators, pavement markings (e.g. directional arrows, centerline/shoulder rumble strips etc.) in order to induce speed reduction on curves (Charlton, 2007; Comte & Jamson, 2000; FHWA, 2009). Pavement markings qualify as perceptual countermeasures implying that they regulate driving behavior by manipulating the visual driving scene (typically; however, other auditory/tactile mechanisms exist - see Godley, 1999). The sensory feedback cues from the pavement markings create illusionary effects such as mirage of increased motion or lane narrowing/tunneling effects aimed at providing drivers with optimal speed and lateral control abilities. These illusions are known to benefit speed reduction and lateral control. While studies exist that demonstrate the effectiveness of pavement markings such as a transverse rumble strip or a forward/backwards pointing herringbone pattern in the presence of intersections or work zones (Godley, 1999; Jamson, Lai & Jamson, 2010), no such clear evidence exists for curves (Godley, 1999; McGee & Hanscom, 2006). The question here is multifold. Are there perceptual countermeasures that can regulate the speed of drivers at the entry and apex of a curve? Are these countermeasures equally effective for curves of different radii? While certain treatments are effective on long tangents, we are interested in understanding the effectiveness of these measures on shorter tangents as well. Since these are perceptual countermeasures that we are assessing, there is a need to ensure that the ability of a driver to anticipate latent hazards (a predictor of crashes) is not detrimentally impacted. 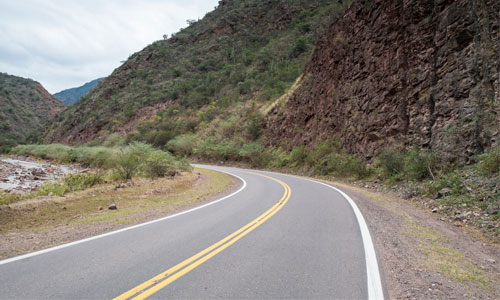